When Jeff and I met during college in 1981 not only did I marry him 3 years later but gained all his high school friends when we moved to Memphis. A group of about 12 of them ran around and supported each other throughout middle school and high school.,,,, Molly, Debbie, Jean, Carl, Cathy, Tom, Missy, Randy, Lynn and more that have moved away. This group has been through so much in this life…..encouraged, loved, supported, and laughed……a lot! 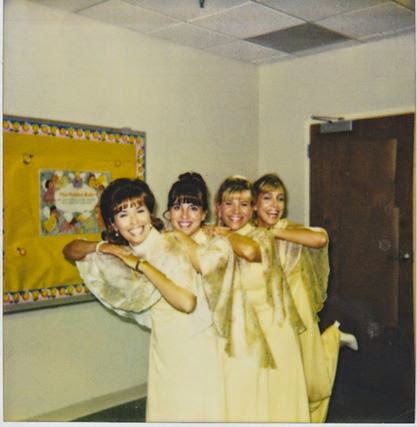 an example of fun times
Jean, Debbie, Molly and me ready to perform at a church party as the Lennon sisters
a perfect example of how funny we all can be
Molly’s husband David snuck in glass of wine in for me and Molly because we were so nervous
about our “performance” lol
Molly held her nose the whole time she drank it cause she could not stand wine!!
I enjoyed mine of course:)

Their first tragedy occurred when Jeff’s father Tommy was killed during a robbery of his distribution center in the spring of 1981. I did not know Jeff at that time but my older sister and brother in law did. Even before his father’s death I had heard Jeff Mounce’s name numerous times as my sister kept telling me she had met my future husband in college (I was a high school senior at this time in Knoxville). She said I was weird just like him haha!

Jeff was a freshman in college when he lost his father. We met the following fall….as the saying goes “the rest is history”. I heard so many stories of his friends back home who had loved and supported him during this time in his life. One such friend was also his roommate Carl. I was immediately friends with this boy/man and his high school sweetheart Cathy, who was working at home in Memphis. During our early married years we spent numerous evenings with them, we lived in apartments next to each other. They were the first people we told I was pregnant with Allie…..

The next tragedy was my loss of Jeff at 38 years old in 2000. I remember Molly crying with me the night he had surgery in 1993 and we were told about the cancer…..telling me she was trying to be brave for me and not cry but could not stop. Molly was who I called when I had to take Jeff to the hospital the week before he died, she took my children and arranged the troops. I don’t even remember all that they did, just that they were all there. As I walked out of the hospital room after meeting with Jeff’s doctors telling me he had hours or days, Jean was standing there waiting for me…..this group just jumps in and loves big. They were there “interviewing” Hank when we met. They approved and supported us as we married:).

Our next tragedy was the loss of Molly and David’s sweet son Stewart at 18 years old, killed in a car accident in 2004. I still have no words, he was our first baby of the group, our guinea pig, our “ok we can do this too” kind of kid. We would have that poor child dance and perform all kinds of tricks when we were all together….a few years later we all followed suit and had children of our own. His loss was…..so hard, the loss of a child is not supposed to happen. I remember each of us there with the family……Cathy not knowing what to say, Jean trying to do something, anything, Debbie crying, Missy and Tom making people laugh……..I was frozen for Molly, my grief so large for this precious friend of mine.

In 2009, sweet Cathy was diagnosed with uterine cancer and died 10 days later. Again the troops surrounded Carl and their children Stephen, Ryan and Carly. Stephen was a freshman in college, Ryan 14 and Carly 11. So very hard again. We have tried hard to be there for the kids, especially Carly. She spent the summer days with me when she was 12 and 13 while Carl worked. It has been a “not what you want for your family” time. Carl managed best he could and has been such a great dad, jumped right in coaching every Lacrosse team Carly has ever been on. Life went on and the kids adjusted to their new life without their sweet mother. Soon after Cathy died we had dinners together during the holidays or around birthdays. Carly facebooks everyone and says its time to get together:). Thankfully she is very comfortable with us all.

Now to present day. On Monday Debbie was diagnosed with uterine cancer….a diagnosis that scares this bunch. She will have surgery on the 16th and we are praying for best case “surgery only” scenario.

On Friday Molly, David, Jean, Hank and myself went to the funeral for a 20 year old boy at our church who was killed in a hiking accident. It was brutal for Molly and David. I am so proud of Molly and David’s courage to walk down that same aisle in church to offer their sympathy to this family standing in the exact place they stood 10 years ago. They bravely supported this grieving family, when it would have been much easier to go about their daily business.  It was difficult for me just being there with them, the sorrows of loss becoming so fresh.

That evening my phone rang as Hank and I were out to eat and enjoying a glass of wine at the end of an emotionally difficult week.  We saw it was Molly calling, I answered worried that she was having a hard night. She had to tell me that Missy just called telling her that Carl had died of an apparent heart attack. Crash……my heart hurts to type it. My first thought was “Christ will you please come back….now”. What about the kids???? I immediately texted Carly asking where she was??? She called immediately and the rest is a blur…..so many decisions for this precious family to make. We have spent much of the weekend with their family and the rest of the time texting each other trying to figure it all out.

I want to ask why?? But I know better now. Jeff used to say “why not me?” Our God is way too big to even understand the whys of this world anyway.

Romans 8:1 For I consider sufferings of this present time are not worth comparing to the glory that is to be revealed to us

Revelation 21:4 He will wipe away every tear from their eyes, and death shall be no more, neither shall there be no mourning, nor crying, nor pain anymore, for the former things have passed away.

John 16:33 “I have said these things to you, that in me you will have peace. In the world you will have tribulation. Take heart I have overcome the world.”

And my favorite two verses, I recited these to myself constantly after Jeff’s death..

Isaiah 55:9 For as the heavens are higher than the earth, so are my ways higher than your ways and my thoughts than your thoughts.

Jeremiah 29:11 For I know the plans I have for you says the Lord, plans for welfare and not for evil, to give you a future and a hope.

The beauty of all these losses is that each of our loved ones were believers. We know they are safely in heaven with our Savior. Do we miss them? yes. Are we sad? yes. But we believe that God is in control even in the sorrow. He never promised us we will not suffer in this world. He does promise to walk with us and to never leave us.

Molly, Jean, Debbie, Missy and I were texting last night. Jean started the text with this 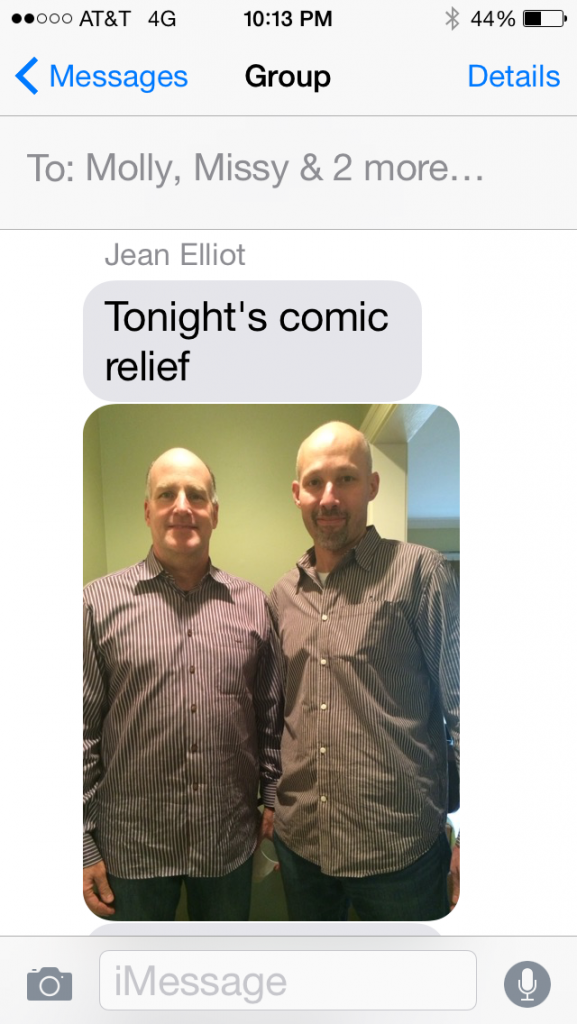 Tom and Hank were dressed almost the same at Carl’s house..
they received a lot of grief
called twinkies
pansies
etc
Our texts went from concern and plans to obnoxiousness
each of us alone at home while spouses were either asleep or out of town
laughing til we cried
Missy and Tom were at a basketball game
I can’t imagine the stares she got as she laughed with her imaginary friends
Debbie so needed some comic relief
we supplied that and more
as only old friends can do
only God can give you such a blessing as this
one of the last texts before we signed off was this 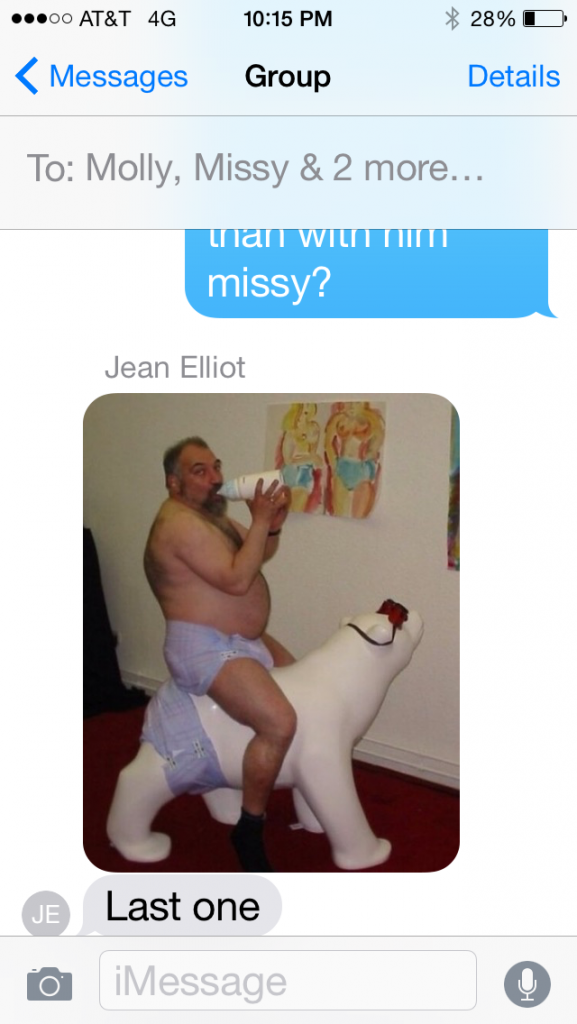 this all comes from me accidentally texting a baby bottle at the end of my wine glasses emoticons
give Missy something to work with and all hilarity will break loose!
We laughed and laughed
good for the soul too:)
I am very thankful for these friends I inherited through marriage
what a blessing!!!