Last week I took Madeline and Janie out to dinner while Hank and John David had other things going on. As the girls clamored for my undivided attention, Janie reminded me that her book character parade was coming up the next week. We began to talk about which character she would like to be from one of her favorite books…I panicked a bit because we had less than a week to put her costume together. I thought back to John David’s first character parade when his costume was ready at least two weeks before the event ha! Well, now we have Amazon Prime so that helps at least right??

As we discussed Janie’s choices it dawned on me that third grade is the last year children participate in the parade. I incredulously looked at Janie and said, “This is your last character parade!” She shrugged her shoulders and matter of factly said, “Mom, I’m growing up.” Janie has the best quotes of all my kids…I laughed and said, “Yep, that you are!” The expected feelings of melancholy did not come, instead I felt a sense of  sweet relief and enjoyment in watching her grow up before my eyes.

With all my other kiddos…I had a sense of dread in that I was not ready for them to grow up so quickly…I wanted them to stay exactly where they were…forever. As Mom’s we all have that moment right?  You know that fleeting feeling of time passing before our eyes as we watch our children do exactly what they are supposed to be doing…growing up…into the people God destined them to be..He knit each of our children together in their mothers’ wombs.

Psalm 139:13 For you created my inmost being; you knit me together in my mother’s womb.

I love that the author chose the word knit. Knitting takes time and planning, it does not merely happen. It takes work, knitting is an intricate process. Three of my children came from another mother’s womb. I am eternally grateful for each of these women for giving birth to three extraordinary girls. Madeline and Janie’s mothers chose life for their girls. And sweet Carly’s mom, Cathy…she was such a dear, sweet mother to Carly and friend to me. I miss her laugh, her sweet spirit but mostly her presence.

Wow, I took a tangent as I was writing about Janie and her last character parade haha! The next week came and I watched my confident girl walk the stage as the the donkey Winslow from Saving Winslow. 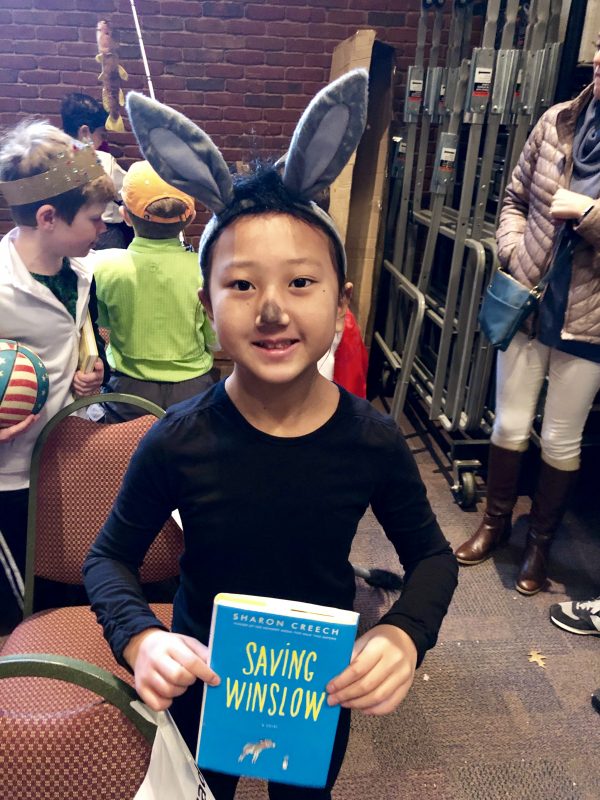 She sure makes a cute donkey! 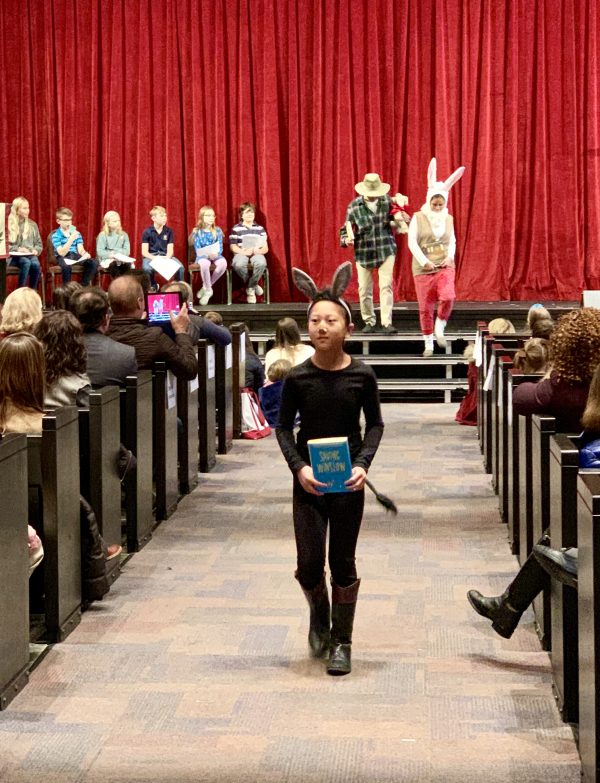 She even has the walk down:)

As I watched my sweet girl participate for the last time, I felt a chapter closing in my heart.  I was filled with peace and joy for her and myself. No longer do I feel sad as I watch my youngest finish milestones of her life…I now celebrate these milestones, thankful that I get to watch and rest in what God has already taught me in raising many children before Janie. As an older “second time around” parent, I have a sense of freedom in the task of raising these last ones at home. I trust that the Lord has them in His hands instead of questioning “am I doing this parent gig correctly?” And NO, I am not doing this parent gig correctly much of the time, but I trust that the Lord will use my discrepancies to show His glory.

All you young Mamas out there…take heart! It is not totally up to you to raise these precious souls alone. Each child is different and is born exactly as God created them to be. We may not get it right in all the crazy, but the Lord has given our kiddos a Mom who loves them something fierce.