Yesterday we received some new info on our Janie:)

1. Li Qing Zhong’s nickname is Qing Qing.
Qing: Deep blue color (“ching”)
We always say Qing Qing Xiao Cao. It means green grass.
2. Ms.Meng has received the package from adopted family of Li Qing Zhong. There are some pictures and toys inside. I have told Ms.Meng to take more pictures of Li Qing Zhong with the pictures and toys that her family mailed to her.
3. Ms.Meng has received the hair bow  today. I have told her taking more pictures also.
Hoping to get those picture of Qing Qing next week!
We also received her quarterly report:
Lili’s foster mother reports that the Lili laughs more than before. She dresses & undresses herself daily. She is very close with her foster parents. She loves to sing Chinese children songs and dance with the music. Her foster mother reported that Lili looks at the photo album of her adoptive family everyday. She points to the picture of her mom, dad, brother and sister and hugs the picture. Lili has begun to greet people and now says “thank you”. She always ask “why” and has begun to scribble on paper. She uses chopsticks to eat by herself.
She is 36.6 inches tall and weighs 30 pounds:) 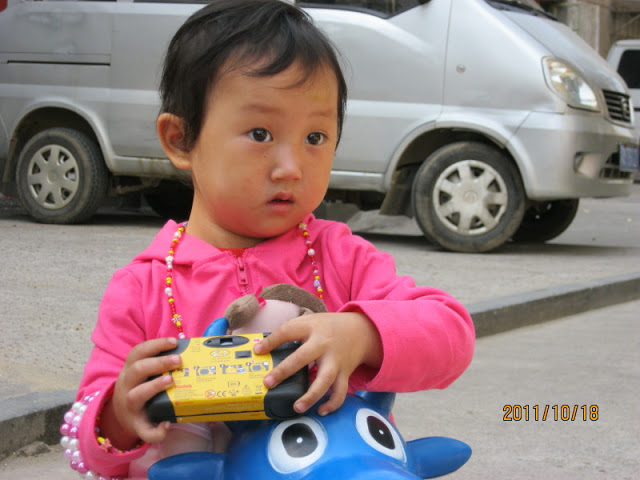