This afternoon Hank and I naively met at the post office with kids in tow to get their passports. Little did we know what a scene Madeline would create just to get her picture taken. This is where few understand unless they have adopted a child that spent some time in an orphanage: Madeline was terrified to get her picture taken ( the sitting in the chair behind a big black camera). Oh the words that came out of her mouth: I hate you, I hate pictures, basically I hate my life! We were listening to the ahhhhs and ohhhs coming from the crowd waiting in line, my emotions went from feeling very sorry for her to ticked off about every half second! Hank of course was great and did not let it ruffle him, or so he appeared:) We tried every sort of bribery; trip to Target, watching Power Rangers it went on and on to no avail.

I finally just left, having finished it all but photos for the M factor. I was determined that she was going to get her picture taken if it killed me and we got pretty close. I explained again that we really want her to go to China with us and she HAS to take a photo for this to happen. We decided to go to Walgreens and let her pick out a toy first and told her that she would not have to sit  and not even sit on telephone books, like at the post office( those really scared her for some reason??) She picked out a great little princess craft book and off we went to the photo lab. She was sooooo brave!!! She was sooooo uncertain……. holding her little book and her silky. I cannot even do this story justice until I get her passport back and take a pic of the pic… it is priceless and so sad to see how torn she was. I forgot to take a pic of the pics since I high tailed it right back to the post office to get it ALL over with! The lady at the post office was so proud of Madeline….. I’m sure she has never experienced THAT before!!!! 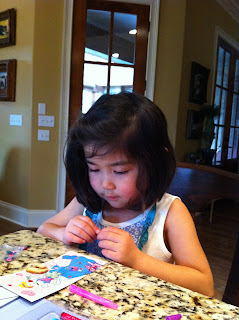 I’ll add the before pic when we get it……. priceless!!