Before you take this post like I am making fun of the older generation…just don’t….
I am now a member of the geriatric population proven by this picture 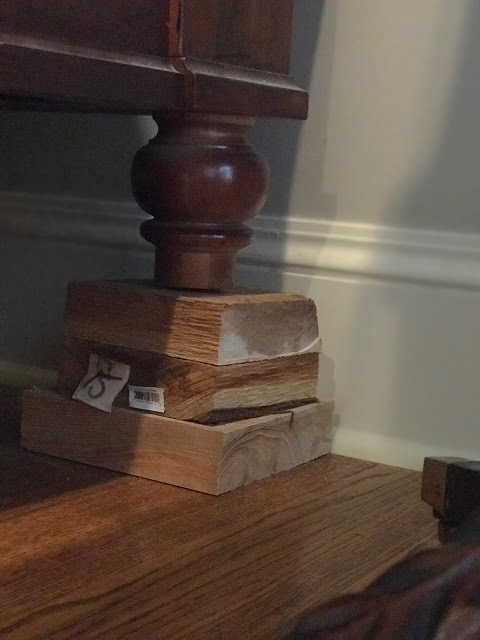 this is my bedframe….on two inch blocks….only at the head of the bed
Why???….you may ask….because we have entered the geriatric phase of life
We have both been diagnosed with reflux as of late…
the doctor recommending our bed to be raised six inches
I fought it hard…telling Hank it will look ridiculous!
I walked out of the bathroom one day, saw the bed and said, “you raised the bed!”
Hank responds, “no I didn’t”
Me, “so why does it look like a it is about to take off?”
I sarcastically thanked John David for helping his Dad make our bed look like it belongs in a geriatric ward…his response, “sorry, he made me do it” haha
As I climbed in bed that night…or attempted to I should say… Hank said he would buy me a running board like the one on his truck to make it easier. Oh he thinks he is so funny!
He then says “it’s just like camping, you always sleep with your head uphill” haha
The next morning he asked how I slept??
“pretty good actually, other than my feet hanging off the end all night”
He said “I slept good too, just had to crawl my way to the top a few times!”
He is so funny!!
I continued to complain about the obvious ugly situation…
He said he is going to invent a contraption that will raise the bed at night so it can be lowered during the day….
my response, “it has already been invented, it is called a hospital bed!” hahahaha
I have to admit we both sleep better, me because Hank is not snoring anymore and Hank because he is the snorer.
At least we have fun in our old age, even if our bed looks like it is going to take off through the wall behind it…and it is plain ole ugly!