Our dogs are polar opposites of each other, kind of funny to watch:)
Odie just turned 6 on March 10th, we got him when John David was 3. John David used to watch  Garfield The Movie in the car constantly when he was 2-3. I remember him quietly saying “I want a dog named Odie”. We had to put Hershe to sleep a few days before John David was born and just did not have the heart to get another dog yet. The day we brought Odie home, Allie sat with John David trying to decide on a name: Allie would say “what about Max?” and John David would say “how bout Odie?”, and it went on and on with many other names from Allie and each time John David said “how bout Odie?” It was sooooo funny so of course he became Odie and is he ever an Odie!!! 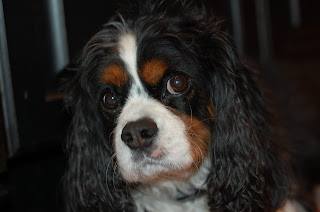 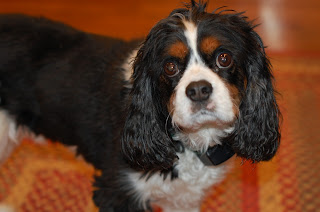 Odie was kidnapped once, seriously!! He used to go to a house that was being built behind ours and go through all the lunch trash from the workers; Odie seriously does not know when to stop eating, he would eat an entire huge bag of dog food if I left it out.He once ate one Julianne’s huge solid chocolate Easter bunnies, and always gets John David’s Halloween candy. One day I could not find him, it started storming and of course Hank was out of town. I figured he was locked in the new house and went there first thing in the morning and No Odie. I cried ALL day, put signs all over the place and walked the field. Hank got home late that day and posted signs all around the new house offering a reward of $500. He knew we would be in marriage counseling if he did not get my dog back:) ( I had asked for an invisible fence but he said I could just watch him, like that is going to happen with kids all over the place)….. so he knew he better find him:).
The next day around lunch time a foreign man called Hank and said ” I think I have your dog, he jumped in my car, so I took him home”…….. REALLY?????? Anyway he and Hank decided where to trade money for dog, he came home later that day with my doggie!!! Can you believe people really do things like that???? Odie was a little wierd for a few days but great after that:) We call Odie the “perfect” dog, he is just so very sweet!

Now about Goldbug. As you can see we let our children name our dogs! Madeline was also 3 when we got Goldbug. Hershe was a golden retriever who really was a perfect dog, she seriously never did anything wrong. I really wanted another big dog but did not want all the hair again. Sooooooo I started pushing for a Goldendoodle. Hank’s partner had Godbug’s sister and Hank texted me one day and said that she was a really good puppy. Well that is all it took. I called Harpers breeder and asked if she still had the sister. Hank really was not ready for anther dog but I was afraid we may lose a “good” one. I started begging…… put her picture on his screen saver saying “Daddy come get me”. I was pretty relentless:) He said the only thing I had ever begged for was Madeline so OK.

Man that first year was AWLFUL!!! hard to house break, hard to keep from jumping on Madeline and making her scream ALL the time. We finally sent her to training camp for a 8 weeks and that was a great move!! Now at 1 1/2 she is such a great dog. I just love her. Julianne and Allie tolerate her but the rest of us love her:) She is such a lug and looks just like snuffaluffigus from Sesame Street, wished we named her Snuffy:). She thinks she is a lap dog, its pretty funny!
As far as her name, she is named after Goldbug in Richard Scary’s books. John David and Madeline loved searching for goldbug on every page of Cars and Trucks and Things That Go. I really wanted to name her Piper but every time I called her Piper, Madeline would yell out “NO Goldbug!”. It did not matter if she was not in the room, she heard it every time and yelled  “NO Goldbug!”. So…. she is Goldbug! 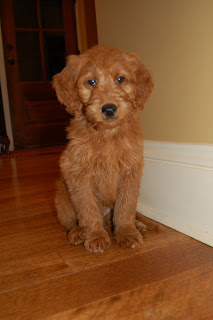 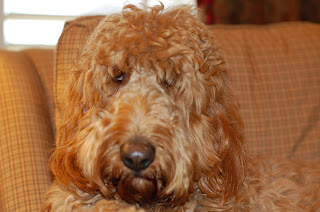 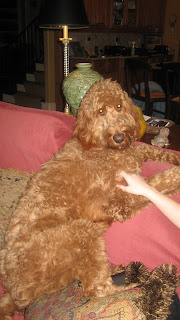 And my absolute favorite and yes she is a trooper!! 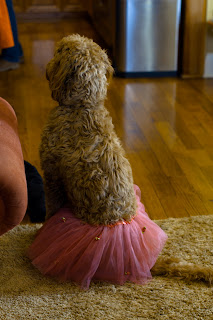