I still have not posted anything about Christmas since I started this after Christmas! One thing we have done since the big kiddos were little is get pj’s on Christmas Eve. Over the years I have gotten a little obnoxious with this, especially as they became teenagers and added Madeline to the mix. I don’t have ANY pics from the early years or the later years but a few!! I will make sure I take them every year now!!

This one is from Christmas 2008 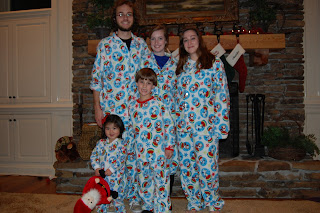 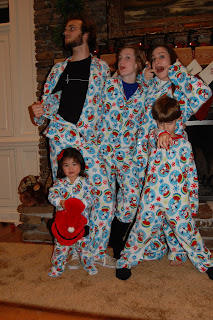 I have no idea what happened to our pics in 2009, think were on memory card I gave to Gardner to take talent show pics??? those pj’s were great, but they fit soooo weird!! I think we all had to wear them backwards because they were so full. You all remember the monkeys???:)

Alot changed in 2009 and we added 2 more to our mix:) Eric and Kendyl:  they jumped right in with all the weirdness of our family!!! 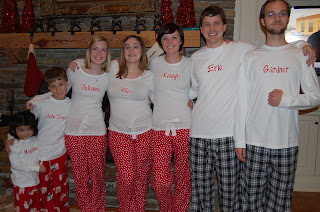 The scary thing is that I have already ordered pj’s for this Christmas! ha!﻿