Yesterday I was loading groceries in the car and Madeline and John David were going at it. When I got in I saw Madeline frantically trying to keep John David from buckling his seat belt. She created this game that whoever buckles first “wins” and yells ” beat you” whenever she gets buckled first (by us:) Anyway obviously John David was not going to cut her any slack yesterday. I turned around and asked him “why in the world do you even care who wins? You’re almost 9 years old and she is 4 my goodness!!!”  His answer….” well apparently I do” . I died laughing and told him that ” apparently, he needs to get over it and let his sister win!”  His answer…. “Mom I’m fragile”  I laughed so hard and told him he is going to be so funny like his brother! He then says…”I’m serious”. HaHaHa Kids!!!! He did let her win:)

Also big news for Madeline. She is terrified to get in front of others by herself. The first time she was to get on the “podium” at gymnastics she hit her teacher!! Well, it was that time again and Coach Cindy asked me what I thought….. we decided that she would call her up when half of the children had already done it and SHE DID IT! She was so proud of herself!! Too precious…. 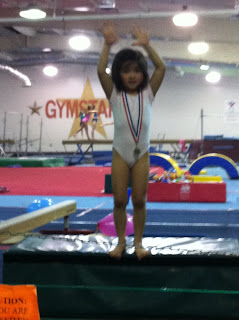 Also Hank and John David finished the fort!!! It is really cool and just like Hank’s from his childhood:) 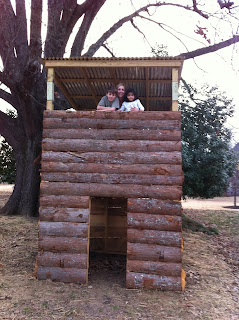