We did it and what an experience it was! I have to admit I was a little freaked after we swam in Aquatic Park on Thursday… I could not get my breathing regulated and my ears and head were soooo cold. Hank of course was as cool as a cucumber!! All I could think is that I needed many more open water swims to be comfortable. That all changed when a thermal cap was suggested at the meeting on Friday afternoon… seriously the best invention ever for a cold water swim. It became my security blanket, I wanted to go to sleep with it that night haha! Hank got one that is thinner than a thermal because he was afraid he would get hot, seriously! His has a silver stripe that makes you much faster according g to the sales guy. Ok my big kids I know you can picture this scenario.. Hank asking this poor guy the same question 10 different ways, making sure he was getting the best cap for him… as Hank asked again about the size of the cap the guy laughed and said ” don’t worry I’m not going to screw you over”. A great “Hank” moment, we laughed and laughed!!!
The entire experience was fun, from Hank trying to get his foot in the sleeve of his wetsuit and me doubled over laughing at him and almost peeing in mine to both of us simultaneously peeing in our wetsuits before we got on the ferry! Before you judge, it is said ” there are those who have peed in their wetsuit and those who have lied!” Needless to say there were many puddles….. I know, totally gross and way too much info, just have to set the scene for the big swim:)
We boarded the ferry, 400 or so people and rode out to Alcatraz. As we were boarding my neck started to spasm and I could not look up or turn my head either direction….yeah I was slightly freaked!! Hank undid my wet suit and deep massaged the area until I could look up again and side to side, all while trying to tune out my asking 500 times ” will I be able to swim?”  Of course he was calm and reassured me all 500 times I asked. The whole neck episode did not let me get nervous about the swim itself, before we knew it we were holding hands and jumping in! What a rush that was! The only part of my body I remember being cold was my face. We both were comfortable the entire swim. We got separated immediately and all I could concentrate on was navigating to the towers they told us to keep over our right shoulder. I guess it was all the adrenaline but I never felt tired and it was over before I knew it. The currents were opposite from what we were told but Hank, the overthinking overanalyzer figured that out within minutes and swam straight to the bay. Of course I had no idea, did not study currents haha!! Somehow I did manage to navigate better than others who were swept much farther than I was! I was totally clueless the entire swim, so in this case ignorance is bliss! All in all it was the most fun experience I’ve had!
If you noticed the title is Alcatraz 2013……..we definitely want to do it again and again:)
We are bringing John David next time if he wants to! 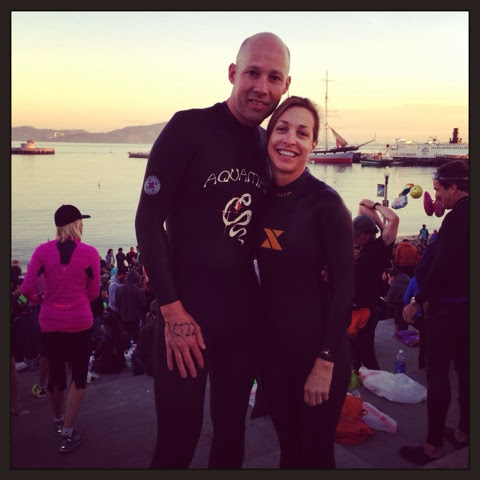 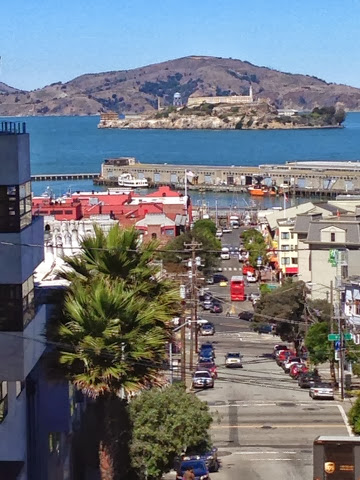 The ferry dropped us to the right of the island and the opening to Aquatic Park is to the left of the short wall, we swam there and then on to shore. 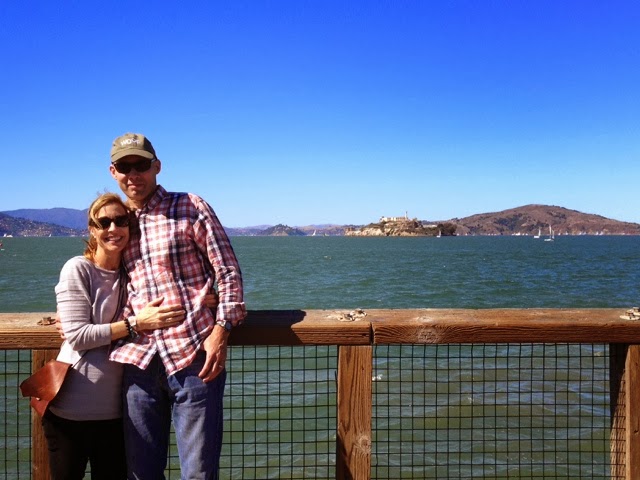 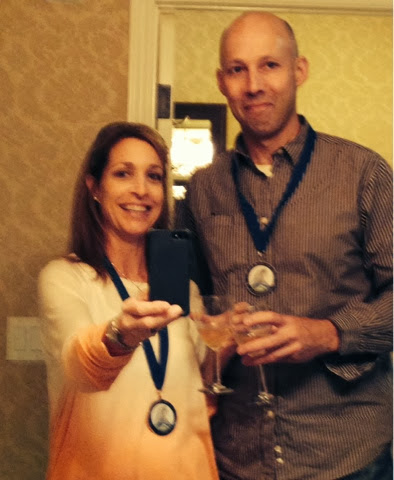 Our GOOBER shot that is blurry we were so tickled! We were too embarrassed to wear them in public after we were showered and changed.